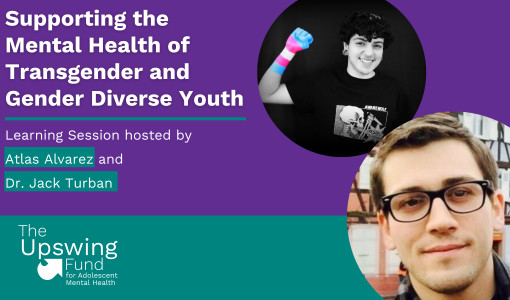 Supporting the Mental Health of Transgender and Gender Diverse Youth

Dr. Jack Turban, MD MHS (he/him/his), is a researcher, medical journalist, and assistant professor of child and adolescent psychiatry at The University of California San Francisco. He is co-editor of the book Pediatric Gender Identity: Gender-affirming Care for Transgender and Gender Diverse Youth.

His research focuses on the determinants of mental health among transgender and gender-diverse youth. His original research and opinion pieces about LGBTQ mental health have appeared in The New England Journal of Medicine, The New York Times, The Washington Post, The Los Angeles Times, Scientific American, JAMA Pediatrics, JAMA Psychiatry, The American Journal of Public Health, and The Journal of The American Academy of Child & Adolescent Psychiatry, among others. He has been consulted by major tech companies, the ACLU, the HRC, and the U.S. Department of Defense regarding policies to support LGBTQ mental health.

Atlas Alvarez (they/he) is a 25-year-old non binary and transmasculine person. Atlas was born in El Centro, California and lived in their hometown, a border town known as Calexico, for 22 years until they moved away to North County San Diego to study Psychology as a transfer student. He lived, worked, and studied in North County San Diego for about a year and a half until the COVID-19 pandemic began to worsen and it became apparent that school would be online for some time.

Atlas moved back to their hometown in the summer of 2020, where he finished his last three semesters of school through Zoom. Atlas graduated with a Bachelor's in Psychology in May 2021 and they are now looking forward to starting a two year MSW program in the upcoming fall at CSU Long Beach.

He currently works at TransFamily Support Services as their Bilingual Youth Programs Coordinator, where he serves as a support group facilitator for Middle school aged LGBTQ+ youth, oversees their gender affirming gear program, manages social media posts across platforms, and assists with the development of their Latinx program to provide services and support to Spanish speaking communities. After completing their Master’s and certifications, Atlas hopes to continue providing support to TGNC and LGBTQ+ communities through approaches focusing on mental health and well-being.

The Upswing Fund for Adolescent Mental Health is a collaborative fund that was seeded by Pivotal Ventures, an investment and incubation company created by Melinda French Gates to advance social progress in the United States. Further support has been provided by The Klarman Family Foundation and other donors. The Fund is advised by a renowned set of mental health experts with deep clinical and research expertise and a passion to support youth and communities. The Fund is powered by Panorama, a platform for social change dedicated to solving global problems through audacious thinking and bold action.